Skip to the content
Home » Pain and Racing Speed » It Always Hurts the First Time and You Remember it Forever, Tour of Bulgaria 2013

The unknown is scary, uncomfortably scary. After the 2013 National Championships I had no clue what was going to happen – life, cycling etc., I was left in limbo. So everything afterwards I considered a bonus. I joined a new team and got thrown straight into  my first ever elite UCI race – The Cat 2.2 Tour of Bulgaria. Popular wisdom says that all nice things hurt the first time, yet you remember them forever.

So that is what Paris-Roubaix must feel like….Cobbles…BIG cobbles and cyclists scattered everywhere trying to find a smooth(er) segment of road. It was sunny, warm and it was….September. No, not Belgium. Sofia, Bulgaria and we were not even racing…yet 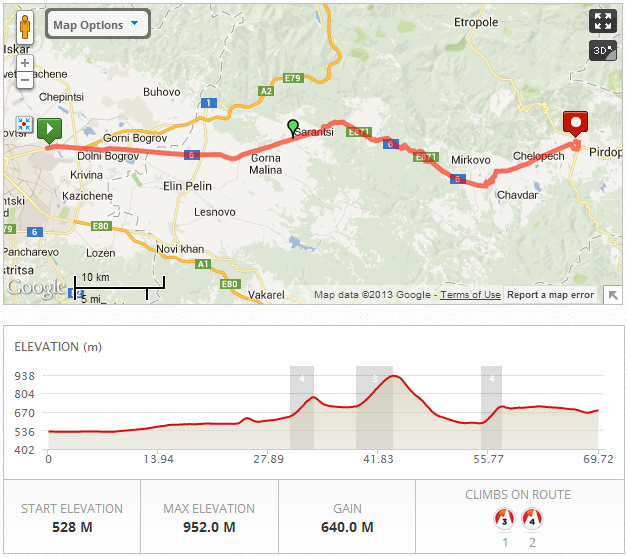 After what seemed forever in race formalities the 63rd Tour of Bulgaria was a fact!  The ancient beauty of the cobbled Dondukov boulevard was turning into a cruel pounding. The race was 10 neutral kilometers away, yet everybody wanted to get out as soon as possible.  The urban landscape was slowly thinning out. Old architecture got replaced with suburban apartment buildings who gave way to the out-of-town industrial creations. The tarmac turned smooth and it all went crazy. Like greyhounds at the racetrack we took off.

The road was flat, the stage was short and nobody wanted to take it easy. The few times I managed to look down I briefly saw 56kph (32mph). Like a giant fan, the huge peloton was sucking me along the road. All I could do was get low and make sure I held on to that wheel in front of me. I craned my head and I saw attacks flying at the front. That was inhuman…those guys were doing 60+kph!!! Small breakaways were forming up ahead. I was hurting just thinking of the effort it took to breakaway from the fast and voracious peloton

Hit me with your best shot

All I could see was the colorful kits of the people in front of me. The pace never eased up. Something was brewing in the seemingly calm peloton. People were shuffling towards the front. And than it hit us…the first climb of the day. We started bobbing up and down as we got out of the saddle to put all the power into the short climb. The pace was still fast, I could see people passing me left and right…and than it was over. I took a cursory look behind me and there were still people negotiating the hill, I was still in the main group. Everybody got low and the descent started. My weight “advantage” allowed me to get quickly into the safe middle of the peloton. The road flattened out and the familiar blistering speed commenced again.

The second climb came and the front of the peloton just exploded. The group snaked and started splitting. I knew I was not going to be able to hang on. More and more people suffered my fate and with the 11 other cyclists we slowly dragged up to the top. The twisting road didnt seem to end, until I saw the coveted writing on the asphalt -1km…time seemed to drag forever…500m….300m and we were over. Everybody got low and we kicked the pace on the flat.

The numbers I wanted to see: 10km to go. I knew I would make it. I dont even remember but as I rounded the last corner I saw the red arch of the Flamme Rouge. Last kilometer!!! I could see people relaxing next to the team cars. I was 8min behind the winner and I made the time cut. A job well done!

They say time is relative. Two hours is a very long time and seemingly nothing when you have to dress up for a second stage in the same day. The double espresso I had just an hour ago was giving me the illusion I had legs that would not fatigue and abandon me. The short neutralization passed like a blur and the race was on. And the pace was….normal. The first gradual climb of the day started almost immediately with the start and the peloton was slowly chugging along the in the midday heat. I felt a hand on my shoulder and my teammate said: they are taking it easy, everybody wants to save themselves for the big mountains tomorrow The words I wanted to hear. I kept spinning and the kilometers kept ticking away. My heart rate was steadily getting higher and higher, my legs were starting to burn. The burn turned into numb pain. The numb pain turned into thousands of needles piercing my quads. 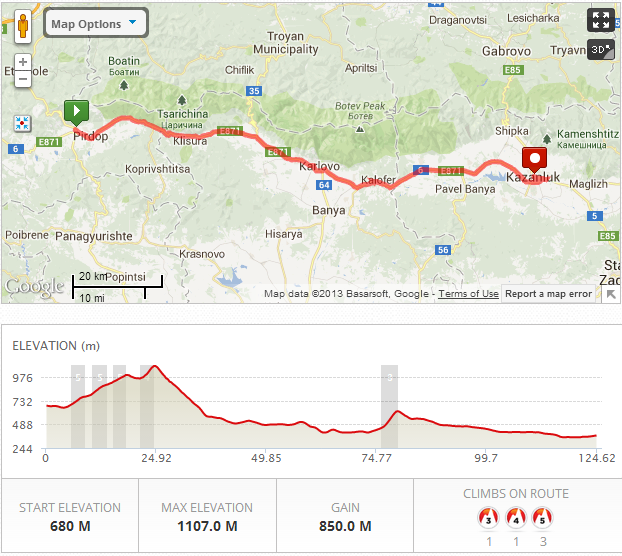 Only a minute left, I could do this. And than it happened. My right leg cramped and locked up. In absolute panic I managed to unclip my foot and leaned against the road barricade. As the race caravan kept streaming past me, the doctor’s car pulled next to me. A minute, two, three and the unbearable pain spilled away. The race doctor gave me a cheer and so I went. 70kph bombing down a descent and no peloton in sight. I kept pushing and pushing and pushing. As I passed the small villages, the gathered crowds cheered me as if I was on my way to winning a world championship. On the hot summer day I got goosebumps. I still couldn’t see the peloton. The false flat descent was a cruel mistress for the lonely cyclist. My legs kept reminding they were a moment away from cramping. I pulled next to the side and unclipped my feet. The broom wagon pulled next to me, I said I was done and climbed in. My race was over. Only a short minute and I would have enjoyed the friendly draft of the peloton until the last hill of the stage when a large grupetto formed and easily made the time cut. Just a minute and I would have finished the stage. It’s a game of inches somebody said. They couldn’t have been more right.

What Did I Miss?

The remaining 4 stages is where the punches of the main contenders happened. Overall the road turned uphill and it didn’t ease up all the way to the finish. This year’s route was geared towards pure climbers and the 2013 edition was not surprisingly won by Remy di Gregorio from VIVELO Martigues (yes the same Remy di Gregorio from FDJ, Cofidis you saw at the 2012 Tour de France).

I had one goal – hold on as much as I can. It hurt like hell and even though I stepped off the bike in Stage 2, I will always remember…

I’ll be back next year, better and stronger!

Home » Pain and Racing Speed » It Always Hurts the First Time and You Remember it Forever, Tour of Bulgaria 2013