Skip to the content
Home » Pain and Racing Speed » Against the Clock » Speed Enve – 1.65 and Purple

The bicycle wheel is simple, elegant and has been conquering mountaintops and trails for more than a century.  A rim, a bunch of spokes and a hub – you could get almost any combination to suit your particular needs. For some reason, as aerodynamics and new materials have entered cycling, when you pick a carbon fiber rim you have to make compromises. Whether you are not a featherlight climber, or you are tied to the so called ‘wheelsystems’ that require special tools and proprietary parts for maintenance, it is a compromise and you as the user have no choice/say in the matter.

A rim, bunch of spokes and a hub with a touch of art, it used to be all so simple to create the best bicycle wheel. It is a refresher the people at Enve Composites agree with me on this one. Although no simple feat, they have developed and patented carbon fiber rim technology that makes building with their components no different than with their classic alloy counterparts – no compromise in durability and no rider weight limit!  Last but not least, although considered boutique, Chris King hubs come as a standard offering. For me it was love at first sight.

As a “bigger than average cyclist (and person for that reason)” I knew  immediately I had the best recipe for the perfect wheelset – Enve 1.65 and Chris King r45 with a touch of purple and a side of Sapim CX-Ray. A definite headturner, unique, durable, stiff and light, the wheelset has it all, so read below for more!

There is something about a bunch of spokes coming together in accord to build a wheel that zooms down a twisty descent or rolls over the broken tarmac mile after mile. Nowadays it has become a lost art that has given way to mass production and a “one-size fits all” mentality. Whether it was a compliment or not, an ex-girlfriend of mine remarked: “You are not a typical anything!” When it comes to cycling equipment and wheels in particular that fact rings even more true.

Although the lightest rims in their class, tipping my scales at 380grams, the Enve 1.65s do not have a rider weight limit. The nice people at ProWheelbuilder reassured me that at 88kg (194lbs) or even with my 95 (210lbs) off-season kilograms, I would be hard pressed to make anything budge let alone break or crack. Crashing and the rigors of cyclocross excluded, for road riding/racing the 1.65 rims are a first choice over their stronger, burlier brother – the 2.65. Even for my weight 24 or even 20 radially laced spokes would create a very sturdy front wheel, however, since I decided to go with the limited edition purple Chris King r45 hubs I had to go with 28 spokes front and rear, resulting in a couple of extra grams (and a very questionable aerodynamic penalty).

I always found lacing up 32-36 spokes to a rim a very soothing experience to pass an otherwise uneventful evening. Under the sounds of The Cure, the Sapim CX-Ray spokes, the Chris King r45 purple hubs came together to create a beautiful wheel. Granted I have never built with internal spoke nipples I found it bizarre  going blind with the nipple wrench so it took some time until I had a system going, after that it was smooth sailing. Once the tension starts higher, there is another “perk” when it comes to building high-end aerodynamic wheels. Bladed spokes such as the CX-Ray need to be held in place or they will twist irreperably. Even with the special DT Swiss tool I somehow managed to twist a spoke or two, that’s what you always get a couple of spare ones, right? 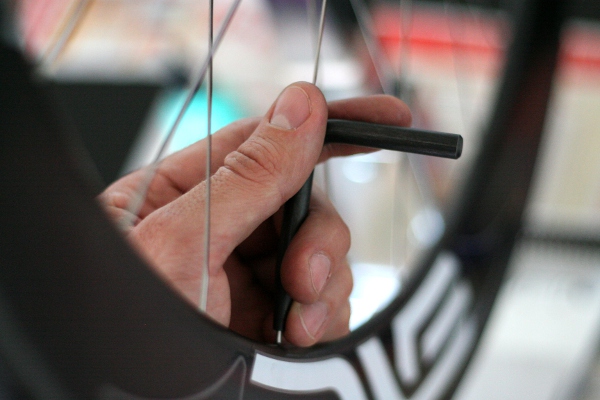 It Was a Tuesday

It was a Tuesday, I will always remember it since I had one of those quintessential (life) experiences. As soon as I clipped in and pushed off from the busy parking lot in front of my house, the bike felt like moving through another dimension. I was not rolling on the asphalt, it was gliding through the mid day crowds as they were thick and cushy clouds. It was a couple of road irregularities that reminded me I was still firmly planted to the ground. As my legs warmed up while I made my way to my training loop the wheels came alive. The whooshing sound was reassuring as the 65mm deep rims were slicing through the air. It all seemed effortless. As unscientific as my 20min test ride was, I knew the wheels were a whole another animal compared to my current 32 spoke box section hoops. As expected the Chris King r45 hubs developed some play due to the new bearings bedding in that I easily re-adjusted. That is why we do test rides, right? The real test was going to be later that night during the weekly training crit. Any ‘new bike’ feeling would quickly dissipate as soon as pain takes over all feeling and emotions.

The clear spring windless day resulted in a sizeable field showing up. After the first neutral lap, the speed immediately went into afterburner mode. As attacks started flying, I could easily get into the small breakaways. The wheels were amazingly responsive and light coming out of the 90 degree corners and they obediently responded to every acceleration, without any reminder they were part of the bike except for the whooshing sound of air rushing past the aerodynamic surfaces. What I found most amazing was that once up to speed the wheels just remained there without much if any input from my side. At the same time the lightness and effortlessness reassured me that the wheels had much more punch left in stock, more than my best legs can handle on a perfect day. Braking also had a feeling of lightness to it. A gentle pull of the lever resulted in a very predictable and uniform deceleration.

Fifteen, twenty five, forty five minutes later as the peloton kept reeling one breakaway attempt after another, my S Works Tarmac was unfaltering.  Another attack, go, go until that sound every cyclist yearns – the final lap bell.

As I let all the adrenaline dissipate around my body on my ride home I knew one thing: I was now a believer that equipment can make a difference. Although it cannot compensate for missed training time, such dedicated aero wheelset is both the icing on the cake and the cherry on top needed come raceday. Having the confidence there is a a piece of equipment made to squeeze every bit of performance is more then reassuring.

When put into time trialing speeds, the wheels whooshing sound transforms into a whistling harmony. No crosswind could alter my line. A strong sidewind felt like being  at a bar in the small hours of the night when that woman you have been talking to all night, gently leans on your side to whisper sweet words into your ear.  It was a pleasure – the best feeling in the world! 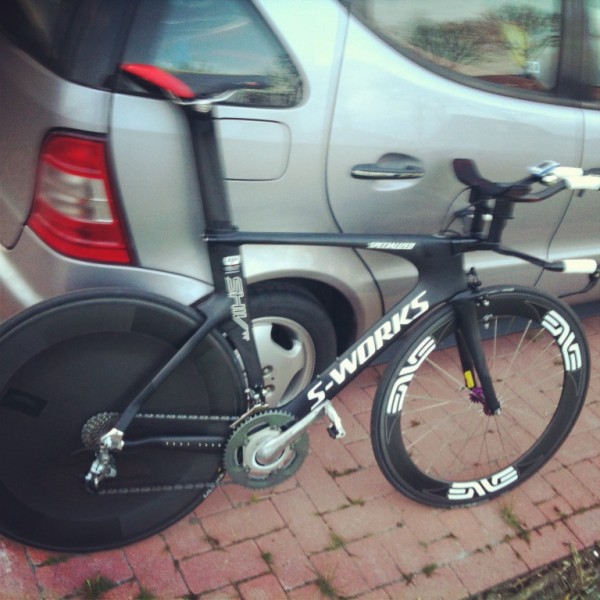 Things light and carbon tend to instill silent respect into all cyclists. “If it ain’t heavy it’s not strong!” is a maxim that is starting to sound more like a myth nowadays. After racing the wheels on broken tarmac and brick pavement on two consecutive weekends when all you could hear from the peloton were chains slapping and components rattling I was sure I was going to crack something. Nope, all I could do to the wheels was a slight out of trueness in the front wheel which is the components becoming more intimate with each other rather than damage.

At the end of the day nothing is perfect. The Enve 65 rims are reminiscent of the classic days of bicycle aerodynamics when narrow and deep was the name of the game. Modern wider, wind tunnel developed and patented shapes might provide slightly better aerodynamics, however, at 65mm deep the Enve 1.65 rims present the best all-around wheelset that can find its place in a breakaway, on a long climb or slicing the wind at an elite time trial. They are lighter than anything in the class, they are fast and they are stiff. With the 5 year warranty and lifetime crash replacement policy at 50% retail price, it is an extra insurance that Enve stands for the best at the highest level day after day, every day. Oh and did I mention they compliment my S Works Tarmac perfectly? Can you say S Works Venge next?=)

A drop of support means an ocean of gratitude.

If you find motivation and value in the content of TheTallCyclist, consider making a donation.

Fantastic write-up. Looking forward to building up a similar wheelset for myself one.

Thanks for the comment. I am sure you’ll enjoy the wheels a lot. Best of luck with your cycling endeavors!

Was looking at these as opposed to the Zipp 606 wheelset. What are your thoughts? Have you ridden the Zipps?

Being a Chris King fan, one of the main reason for getting the Enves was the fact i could choose the hubs, rather than having factory built wheels. I had the purple CK r45s and they came at only 28 holes so it was the classic Enve rather than the new Smart System. I enjoy the whole process of building wheels for just my own personal needs, that includes selection of parts. This is something which Zipp doesn’t currently offer. Also even though i am way below the 225lbs rider weight limit of the Zipps, i am still a bit heavier (86kg, 189lbs) than a lot of cyclists. The ‘no rider weight limit’ of the Enves together with lifetime crash replacement were abig part in my decisions as well.

Aerodynamics wise, If all those wind tunnel tests are really true, the Zipp Firecrest shape might be superior in some (i emphasize some) wind conditions. I have not ridden any Zipp wheels to have a direct comparison, however, i think most wheels/rims at similar depth are very close to each other.

As conclusion, i am a bit biased towards the Enve rims and based on my own experiences i can highly recommend them. As the original owner, it is reasurring i can get new rims at half price if i ever crash damage them. Enves are not as known as Zipp around here, i still get positive comments about them though=)

I hope my answer was helpful, if you have more questions, drop me a comment.

Good luck with your cycling endeavors!