Skip to the content
Home » Pain and Racing Speed » Against the Clock » Time Trialing – Power, Position, and Pacing

Time Trialing and YOU

When I did my first time trial, I was psyched. I had a true time trialist power profile, I had worked hard, I practiced riding with aerobars, had a cool looking helmet. Fifteen minutes into the race I got passed by a guy seemingly twice my age. A train speeding past a small station was the correct image for the situation.

So apparently there was more to time trialing than I imagined. As I progressed during the season, culminating in my finish in the top half at the 2012 National TT Championships I have narrowed down what it takes to do a good time trial to three major points. I consider these the absolute fundamentals that are ultimately more important than all the bling you can acquire. I say this because it is not unusual to see EU10,000+ worth of stuff on a SINGLE bike at competitions. However, I digress…

A good (fast) time trial takes three things Power, Position, and Pacing. All three are equally important. You can produce lots of power, however, a poor position on the bike or vice versa can “make-it or break-it.” Additionally, you can waste all the power you have by sub-optimal pacing.

The harder you can pedal the faster you go. The more watts you can produce, the faster you will be able to move the bike forward – it is as simple as that. This is often referred to your Functional Threshold Power – the maximum you can sustain. Most time trials are flat so absolute power (total watts) is more important than relative power (watts per kilogram). For example a 55kg world class climber doing 6W/kg (330w) versus a 85kg Cat1 time trialist doing 5W/kg (425W.)

Overcoming air resistance takes 80% of your energy – that is A LOT. The faster you go, the resistance becomes higher and higher. Therefore by making yourself aerodynamic you will have to overcome less air resistance, so more of your power will be used for going faster rather than fighting the wind.

Most of the times in order to get aerodynamic cyclists just put on clip-on aerobars as low as possible and call it a day. Unfortunately it is not so straight forward.

I am not going to get technical. What you need to understand is a term called hip angle (angle between your torso and you thighs). If you are pedaling upright, no hands enjoying the sunshine, your hip angle is large or very open. If you are really squeezed down on the drops your hip angle is small. To get lower (more aerodynamic), your hip angle should get even smaller. Two things will happen, you will be uncomfortable and will have trouble pedaling. Second, your knees will hit you in the chin (more uncomfortable). Just adding clip-on aerobars causes just that.

Since you do not want to move your upper body higher, the only other way to open up your hip angle is by sliding (the saddle) forward AND rotating your pelvis (hips). By doing this you will not be able to use the dropbars, you will have to support yourself on your elbows, and hold on to something – enter the aerobars. On the diagram below is my favorite cyclist who I call The Stick(R). In red you see him in the regular road position, in green you see him again, however, in a much more aerodynamic TT position. Same person, saddle height, same hip angle (white lines), one is much more aerodynamic. 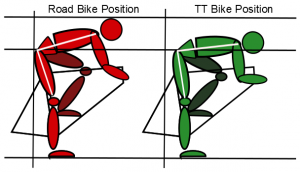 So if I move my saddle even further forward and extend my reach I will be very aerodynamic!

That is correct, that is why the cyclists central governing body UCI has some very stringent rules regarding your position. The nose of your saddle should be no less than 5cm (less for smaller cyclists) from the center of the bottom bracket and no more than 75cm reach for the aerobars (80cm for taller cyclists). As you get faster you will inevitably stumble upon a sanctioned event so stay around the UCI guidelines.

An aerodynamic position is not something you should try on the day of your race. It takes time to get used to. We are all different so experiment with what will work for you. A powermeter is invaluable here as well. With enough practice you should not be losing any watts on the TT bike as compared to your road bike. If you are, your hip angle might be too closed. An aggressive position takes time to get used to. You MAY use the positions of top time trialists as guidelines.

One intermediate solution is using short aerobars. You don’t have to move as much forward and will still maintain a good hip angle in a semi-aerodynamic position.

NEVER EVER start too hard.You should respect the redline! Knowing your limit is invaluable. The Functional Threshold Power (FTP) is a good starting point. What maximum power you can sustain, is what you can sustain – period. Adrenaline at the starting line will make you feel invincible. It only takes 3-5minutes until that delusion is shattered, VERY painfully shattered. Set a target wattage for the race and stick to it. A powermeter is the best tool for pacing, nothing else comes close. Couple of pacing strategies are outlined below.

As you noticed I mentioned carbon once and I almost completely avoided talking about specific equipment choices. You read correctly, no need to go back. A good time trial starts with Power, Position, and Pacing. Everything builds from there. Expensive wheels, high-tech frameset, etc, etc. do make a noticeable difference, however, you can’t build something significant on a poor(starting) platform.

P.S. I will cover equipment choices in a separate post soon.

For further information check the ever -increasing Reading List

A drop of support means an ocean of gratitude.

If you find motivation and value in the content of TheTallCyclist, consider making a donation.